"Sundancing with the Muse" DVD 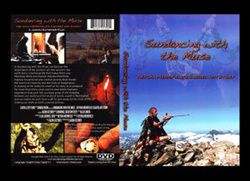 In Sundancing with the Muse, we discover the importance of the sacred in art, the sacred in the earth and a ceremonial life that makes them one. Artist and shaman Heyoka Merrifield, exposes his personal and creative Journey that reveals the source of creativity and the roots of imagination. In looking at the medicine wheel of his story as a sundancer for more than thirty years and his near death shamanic experience that gave him a unique grasp of the interplay between our world and the world of spirits, a path is illuminated and we realize we each have a gift to give away to the circle of life, making our walk on earth a sacred journey.  $30.00

To View: Sundancing With The Muse (full movie in HD 85 Min)
http://youtu.be/A3teeVyYGkw
add to cart 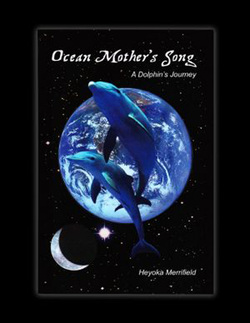 The young dolphin Morning Star, who feels different and estranged from her family pod becomes captured and taken to a petting zoo aquarium. During her captivity, she helps to discover a method of inter-species communication. Star also realizes that humans are causing the many ecological problems in the sea. Determined to restore balance, she escapes and goes on a quest to help find a way to heal her Mother Ocean. Heyoka spends much of his life in nature and with a close relationship with the animal powers. He was inspired to write this story after swimming with both dolphins and whales feeling a mutual delight and communion in their contact.

The book includes 23 photographs of dolphins and whales.  $23.00
add to cart 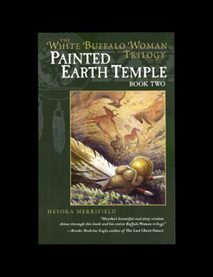 ﻿﻿﻿"Painted Earth Temple": Hardcover
​In his prequel to Eyes of Wisdom, The Myth of White Buffalo Woman, Heyoka describes the life of the people who worshiped in the great cave temples of Europe. These Paleolithic hunter/gatherer ancestors of ours had a deep connection with the wisdom of the Earth, and their unique ceremonies reflected their pursuit of the Way of Balance within the Web of Life. When the Aryan tribes overwhelm the older cultures of the world, the Painted People are forced to leave Gaiaâ€™s Land and migrate over the land bridge into the New World. Merrifieldâ€™s story brings to light that rediscovering the way our ancient grandparents were nurtured by life in the natural world may be an empowering gift in our present journey toward wholeness.  $20.00
add to cart

﻿
﻿
﻿"Eyes of Wisdom": Hardcover
The story of White Buffalo Woman is the primary myth of the Native American tribes of high plains. She brought the peace pipe to the people and gave them the sacred teachings of life. Heyoka Merrifield tells the story from birth to an old man of Owl, one of the young men that first contacted White Buffalo Woman. The teachings of sacred pipe are shown unfolding the essential nature of his tribe, and later all the surrounding peoples. Owl and his twin brother are apprenticed to the tribal medicine woman, their grandmother Eyes of Wisdom. Illustrated with 14 pictures and drawings.  $20.00
﻿ 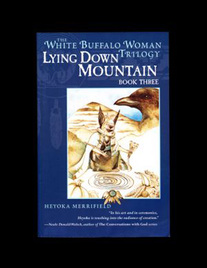 ﻿"Lying Down Mountain" Hardcover
White Buffalo Woman, of Native American mythology, journeys to the land of the Hopis (the peaceful people). In their village, she is honored as a respected Medicine healer and teacher. Buffalo Woman becomes part of a dream circle that receives highly prophetic teachings. The prophesies, most of which have come true now, were met to help us and the Hopi tribe find a path of balance during this crucial time on Mother Earth. $20.00
add to cart 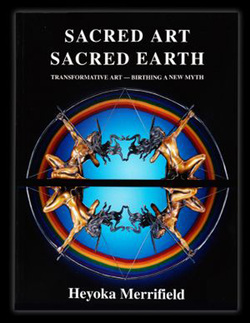 "Sacred Art Sacred Earth": Paperback
Transformative Art; Birthing a New Myth. "In Sacred Art Sacred Earth, Heyoka has told the story of his life by exposing his personal and creative journey as an offering that reveals the source of creativity and the roots of imagination. The exquisite photographs of his sacred art make his alchemical visions available to many, book form. The story of his courageous growth into shamanistic powers opens our hearts." Barbara Hand Clow: Author of The Pleiadian Agenda and Heart of The Christos.  $30.00
add to cart 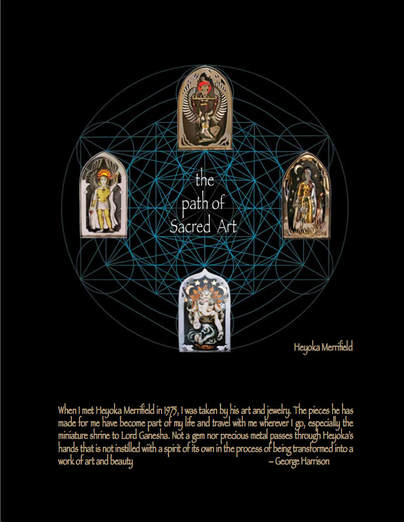 "The Path of Sacred Art" is Heyoka Merrifield's most recent book, a new and completely enhanced version of his "Book of Shrines".  He uses prose, poetry and photographs to tell how his love of nature and the world's spiritual traditions awakened his artistic vision. He describes how he has been inspired to create shrines, in the tradition of our ancestors, to express the aspects of humanity's mythologies that we now require to restore harmony with Mother Earth and all our relations - for the next seven generations.
​$20.00